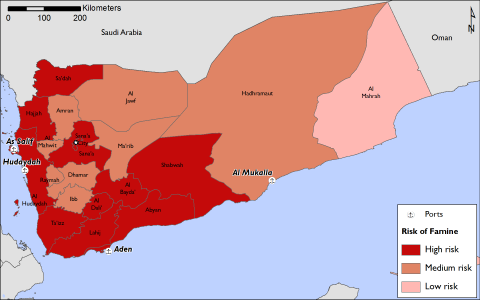 Figure 1: Yemen Risk of Famine, given closure of all seaports 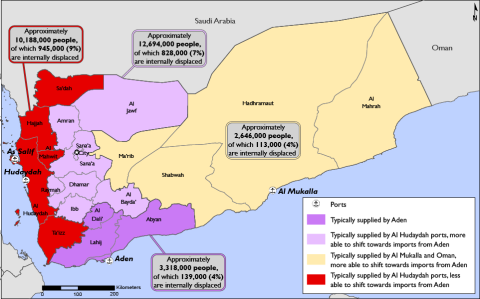 The recent closure of all Yemeni seaports is highly concerning. Even before the current blockade, Yemen already faced the largest food security emergency in the world, with more than 15 million people facing Crisis (IPC Phase 3) or worse food insecurity and in urgent need of humanitarian assistance. Yemen is reliant on maritime imports for more than 80 percent of its annual staple food supply. Therefore, a prolonged closure of key ports risks an unprecedented deterioration in food security to Famine (IPC Phase 5) across large areas of the country.

If all ports remain closed, or re-open but are unable to support large-scale imports of essential goods, Famine is likely in many areas of the country within three to four months. In less accessible areas with the most severe current food insecurity, Famine could emerge even more quickly. In this scenario, food availability would be severely constrained, as the potential for overland trade to offset the decline in maritime imports is extremely low. In addition, concurrent limitations on fuel imports would accelerate sharp increases in fuel and staple food prices, while the lack of imported medical supplies would jeopardize treatment options for life-threatening illness. Thousands of deaths would occur each day due to the lack of food and disease outbreaks. The areas where Famine is likely to appear first are those that are heavily reliant on maritime imports for staple food supply, those areas with large IDP populations, and/or areas where levels of acute malnutrition are highest (Figure 1).

Recent reports indicate that Aden port has officially re-opened to commercial and humanitarian shipping, but with limited capacity to receive imports and mill grain. Even if throughput improves significantly, Famine will remain likely, once stocks are depleted, in areas that had relied on food imports from Al Hudaydah ports, but that are less able to shift towards Aden as a source of staple food (Figure 2). In addition, even for areas that are able to access imports from Aden, a risk of Famine would persist given the increased competition for goods imported through Aden and already severe levels of acute food insecurity.

In either scenario, the very large shortfalls in the availability of food, fuel, and medical supplies could not be met by humanitarian assistance alone. Even prior to the blockade, humanitarian agencies were able to meet less than half of monthly humanitarian assistance needs. The immediate resumption of essential imports though all Yemeni ports is critical to avert a severe deterioration of food security and health outcomes and the potential for wide-spread starvation and loss of life.