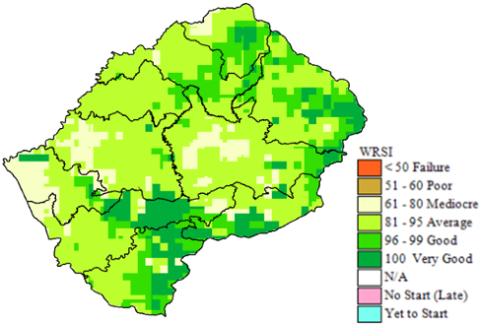 Increased rainfall during January improved conditions of crops across Lesotho. Maize, the staple crop, is growing well and in good condition due to ongoing rains. The Water Requirement Satisfaction Index (WRSI) for maize as of the first week of February 2020 indicates average to good crop conditions for maize across Lesotho (Figure 1). Although this is a good development, crop growth is behind schedule, with crops either not having reached or just now reaching the reproduction stage. The upcoming winter could reduce yields of crops that fail to mature before the onset of seasonal frosts. In addition, late crops also risk being affected should seasonal rainfall end earlier than normal.

As a result of these risks, some agricultural households have planted short season varieties of maize to keep track with the rainy season. These varieties are expected to mature more quickly, thereby helping to mitigate the risk that frost or an early end of season would reduce yields.

Still, production prospects are low this year, leading to a likelihood of a third consecutive below-average harvest. Though harvests will temporarily increase access to own-produced foods, their food stocks and cash income from the sale of crops will likely be lower than normal between July and September. Additional information on production is expected following the upcoming crop assessment led by the Lesotho Disaster Management Authority. With ongoing agriculture activities such as weeding, fertilizer application and spraying of chemicals, poor households are accessing labor opportunities especially for weeding. However, given the low cropped area and delayed crop stage, these opportunities are below average. Wage rates are also below average due to generally poor liquidity by middle and better-off households.

Availability of pasture for livestock has greatly improved due to ongoing rainfall. Water bodies are also replenishing though still lower than average. These conditions are improving livestock body conditions which had deteriorated significantly during the dry season. Prices for livestock are expected to improve during the post-harvest period from June to August due to improved conditions.

Markets in Lesotho are continuing to behave normally. Maize meal from South Africa is dominating the markets and ensuring consistent availability of staple food across Lesotho. Local maize grain has almost disappeared from the markets as many farmers depleted their own produced stocks earlier than usual in 2019. Households are mostly reliant on market purchases for staple foods, as most exhausted their stocks in 2019. Maize meal prices have been generally stable since November 2019. During the projection period, maize meal prices are expected to be generally stable due to price stability in the source markets in South Africa. Although demand is high in Lesotho, supplies have been able to meet demand thereby keeping prices generally low. FEWS NET expects maize meal prices in Maseru market will likely follow the five-year trend, with marginal increases (3%) between February and March likely resulting from announcement of production prospects in South Africa and also projected maize prices in the source markets of South Africa (Figure 2).

Despite stable maize meal prices, household purchasing power remains low due to low incomes. This is limiting access to food from markets, especially among poor households. With the delay in green consumption due to delayed crop growth, the lean season is likely to extend slightly. Most of Lesotho is facing Crisis (IPC Phase 3), which will likely continue until May when the harvest begins to improve household access to own-produced foods and income from the sale of crops. Therefore, food security outcomes are expected to improve to Stressed (IPC Phase 2) and Minimal (IPC Phase 1) from May to July.  From August to September, some areas will begin to experience Crisis (IPC Phase 3) outcomes earlier than usual due to below average harvests likely to be experienced in 2020.

In remote monitoring, a coordinator typically works from a nearby regional office. Relying on partners for data, the coordinator uses scenario development to conduct analysis and produce monthly reports. As less data may be available, remote monitoring reports may have less detail than those from countries with FEWS NET offices. Learn more about our work here.

The Famine Early Warning Systems Network is a leading provider of early warning and analysis on food insecurity. Created by USAID in 1985 to help decision-makers plan for humanitarian crises, FEWS NET provides evidence-based analysis on approximately 30 countries. Implementing team members include NASA, NOAA, USDA, USGS, and CHC-UCSB, along with Chemonics International Inc. and Kimetrica. Read more about our work.